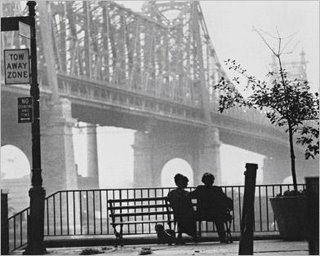 Last night was my second MoMA screening of The Joy of Life. I was up against Rossellini’s Paisan in Titus 1. Of course, most of the mob at the MoMA ticket counter was for him, not for me. Having seen the beautifully restored 35mm print of Rome: Open City that kicked off the Rossellini retrospective the night before, I was tempted to skip my own movie in favor of a Neo-Realist classic.

Standing in the lobby, who should I see but Bill (from Cinemania)? Approaching him out of some irresistible impulse, I say, “Thanks for coming to my movie the other night.” He looks at me defensively and says, “I didn’t see your movie. What movie? Are you a filmmaker?” And I’m like, “Oh, uh, I’m sorry. I thought you were there.” Fumbling, I congratulate him on being in Cinemania and he looks at me like I’m crazy.

And so, it seems I was mistaken. That bespectacled nerd in my audience last Saturday night was some other poor, under-sexed straight guy out for a night at the movies.

Surely some self-effacing Woody Allen quote is in order here – patron saint of all us neurotic geeks. But I can’t think what it is. I’ll have to put Manhattan in my Netflix queue when I get back to San Francisco.

P.S. There is still one more chance for New Yorkers to see The Joy of Life on the big screen -- at the IFC Film Center this coming Monday November 20th!
Email Post
Labels: film history memoir New York The Joy of Life