Notes from An Amateur Historian

The Turin Gay & Lesbian Film Festival asked me to write an essay about my background as a film collector and historian for their 2007 Festival catalog. Here it is, complete and unedited:

Only in the last few years have I developed the confidence to describe myself as an archivist and historian. For years I was merely a “collector” – an accurate but not very glamorous term for my passionate obsession with all things related to LGBT movies (posters, pressbooks, movie stills, and, the actual film prints themselves). ADDICTED TO CELLULOID
It all started with 35mm movie trailers. I had this compulsion to actually own celluloid. Not just a video of a movie, but the film itself. Complete 35mm feature film prints weigh close to 100 pounds and take up a lot of space. They can also be quite expensive. So, to start with I settled on trailers. Which are about the size of a large, double-thick hockey puck and only cost between $5 and $30 or so (though the good ones are far more expensive now).

My first purchase was a 35mm trailer for The Killing of Sister George, which I got from an old projectionist in Kansas City, Missouri for $5 plus postage, back in 1986. From then on I was hooked. It took me only a few years to amass 35mm trailers from almost every major LGBT movie made prior to 1976.

With the encouragement of my friend Mark Finch (who was then co-director of the London Lesbian & Gay Film Festival) I managed to put together a feature length chronological program of the best of them, which then premiered at the 1991 London festival. Homo Promo went on to play at dozens of gay film festivals as well as enjoying a successful US tour of the Landmark Theater chain and a home video release in 1994 (it was finally released on DVD last year by Strand in the US and by Millivres in the UK).

My addiction to celluloid became even more pronounced in the ‘90s as I scoured listings in my monthly film collector’s newspaper and snapped up every obscure LGBT film print I could find. These included 16mm and 35mm feature films, film prints of TV shows, educational shorts and early silents.

Many of these gems are being showcased in this festival including the feature films: That Tender Touch, Dallas Doll, Times Square, Something Special, The Killing of Sister George, The Maids and the shorts: In Winterlight, Costume Party and No Help Needed. A WALKING ENCYCLOPEDIA OF LGBT FILM
In the late ‘80s I started research on a lesbian filmography (as my thesis project at the University of Minnesota) which evolved to become my first book, The Ultimate Guide To Lesbian & Gay Film and Video (in 1995 the book morphed into the massive LGBT film website, PopcornQ.com). My interest in historical representations of LGBT characters in film also prompted me to launch a campus film series called Lavender Images (which I programmed for many years before co-programming the Minneapolis/St. Paul LGBT Film Festival – which, sadly, no longer exists as of 2005).

Aspiring to obtain an encyclopedic knowledge of every LGBT film ever made I did extensive research on historical representations of LGBT characters in film. Having practically memorized Vito Russo’s The Celluloid Closet, Richard Dyer’s Gays in Film and other seminal LGBT film history texts I continued my research at the University library by browsing the bound volumes of back-issues of Variety and the over-sized back-issue collections of New York Times Film Reviews. With particular attention to films of the ‘60s and ‘70s I spent many wonderful winter days in the Wilson Library reference area with golf pencil and scrap of paper in hand scribbling down poorly organized notes and making photocopies of significant listings.

This was the source of one of my favorite discoveries – the 1969 Dykesploitation drama, That Tender Touch, I still have the photocopied Variety review in a file in my office (which begins with the line: “One more variation on the lesbian thing.”). I was extremely fortunate to purchase a rare 35mm print of the film back in 1993 and have made it available for a select few LGBT film festival screenings over the years. I’m especially pleased to be presenting this film here in Turin. That Tender Touch will also be released on DVD in the US this summer by Wolfe Video.

The three older features we’ll be watching: The Killing of Sister George (1968), That Tender Touch (1969) and The Maids (1974) are tremendously entertaining for today’s lesbian audiences mainly because enough time has passed to make the “negative” stereotypes less painful to view, and enough other “positive” lesbian representations have been brought to the screen. To complement those fun, bad old days I’ll be screening three slightly more recent features from my collection: Times Square (1980), Something Special (1986), and Dallas Doll (1994). This is a very rare opportunity to see these films and they are truly not-to-be-missed.

At this historical post-Brokeback Mountain juncture, there has been a strange resurgence of negative gay stereotypes on screen. It’s curious to note that 2006 will go down in history as the year that LGBT people finally embraced our previously rejected cinematic heritage of suicidal (Little Miss Sunshine), psychopathic (Notes On A Scandal), fashion designer (The Devil Wears Prada), gruesome murder victim/murderous bisexual (The Black Dahlia) stereotypes. This year’s models are certainly kinder and gentler negative stereotypes than their predecessors. Still, what does it all mean? ACCESS TO OUR FILM HISTORY & THE LEGACY PROJECT
In 2002 Chronicle Books approached me with the request that I write a book about the history of LGBT movie posters utilizing my extensive collection. The Queer Movie Poster Book explores the chronological evolution of queer movie marketing in the United States including such wildly entertaining chapters as: Dykesploitation, early gay porn and a section entitled simply: “Guys with their shirts off.” On publication of the book in 2005, I donated the vast majority of my poster collection to the LGBT Historical Society of Northern California where it is now accessible for researchers and historians.

Around that same time I was also very fortunate to partner with my colleagues Stephen Parr and Robert Chehoski at Oddball Film + Video in San Francisco. Oddball has been able to take care of my film prints (which freed up a lot of space in our pantry and made my partner very happy). Oddball also coordinates screenings at film festivals (including this one) as well as arranging licensing for some of my footage to documentary filmmakers like Susan Stryker (Screaming Queens) and Jay Rosenblatt (I Just Wanted To Be Somebody). This past year Oddball even facilitated a presentation of some of my footage at the Association of Moving Image Archivists annual conference.

I’ve been wishing and advocating for some kind of organized LGBT film preservation effort ever since meeting filmmaker/archivist Jim Hubbard and bonding over our mutual passion for this vitally important mission. (Jim founded the AIDS Activist Video Preservation Project which has re-mastered nearly 600 tapes documenting the grassroots response to the AIDS crisis in the US).

Last year that wish came true and I was invited to be on the advisory board of the Outfest Legacy Project for LGBT Film Preservation at the UCLA Film & Television Archive! It is an amazing project with an ambitious mission to help preserve, conserve and provide access to our LGBT film heritage. I was also fortunate to make the first film print donation to The Legacy Project: a 35mm print of Queens At Heart (a 1965 exploitation documentary about male to female transsexuals in New York City).

Maybe the festival will invite me back next year to show off even more of my collection!
Email Post
Labels: lgbt film history

Michael Guillen said…
Jenni: How lovely to hear how you've come into being an archivist and historian. Fascinating. I'm glad the festival inspired you to graph this out. Your work has been so crucial to my own and I look forward to experiencing your future research.
6:31 AM 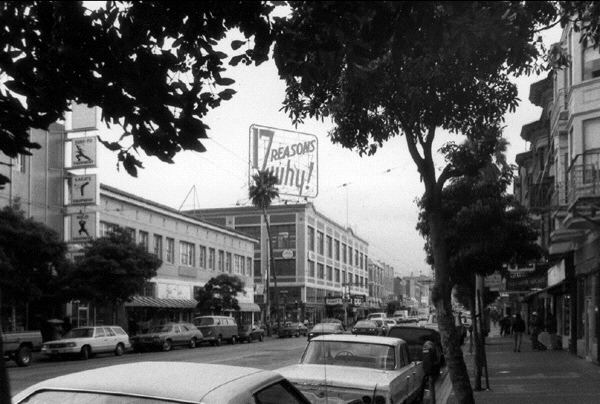