Queer Brunch at Sundance: The History 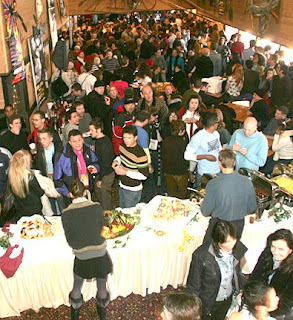 Just found this nice little piece about the history of the Queer Brunch from Peter Bowen on the Sundance Channel site.

Filmmaker Jenni Olson, one the Brunch's founders, remembers how it came about: "In 1996, I spoke with Morgan Rumpf, the then head of Outfest and we both wanted to do some sort of queer party. We teamed up with ITVS and each chipped in about $100 for bagels and stuff. And since we couldn't afford a venue on Main Street, we found the Grub Steak Restaurant, which only wanted $7.25 a person to cater. That year we had about 50 people. Now it seems like everyone wants in."

People thought we were crazy to be having a party anyplace besides Main Street. And when we actually saw the enormous size of the Grub Steak (which I had booked by phone, sight unseen) it was a bit overwhelming. We limited the party space that first year to just the entryway area so the party wouldn't seem so pathetically small. The event has grown by leaps and bounds since then and has expanded into the entire space of the restaurant (as you can see in the picture above from the 2006 Queer Brunch — look, there I am over in the left lower corner talking to that blonde who is nowhere near as cute as my girlfriend).

This year's 13th Annual Queer Brunch takes place on Sunday January 18th from 11am-1pm at the Grub Steak Restaurant (2200 Sidewinder Drive)! This year's presenting sponsor is Here! TV. You're supposed to RSVP to the folks at Outfest, or you can take your chances and just show up. See you there!
Email Post
Labels: 575 Castro St. Queer Brunch queer film Sundance