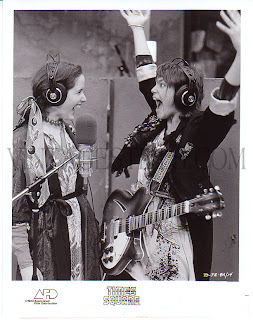 I just posted this on my FilmInFocus.com blog and couldn't resist cross-posting here.

The release of PIRATE RADIO offers a great excuse for me to blog about my favorite radio DJ movie of all time (in fact my favorite movie, period, of all time), Allan Moyle's 1980 NYC teen-girl adventure tale, TIMES SQUARE. Please chime in in the comments field below and share YOUR favorite radio DJ movies (maybe you're thinking about Allan Moyle's 1990 follow-up to TIMES SQUARE, PUMP UP THE VOLUME with Christian Slater?).

Allan Moyle's TIMES SQUARE is one of the all-time cult classic movies of my generation. The story is structured around late-night disc jockey Johnny LaGuardia (a great performance by Tim Curry) as he follows and narrates the drama of teen runaways Pammy and Nicky (Trini Alvarado and Robin Johnson). If you have not yet seen this film — run don't walk to your Netflix queue. If you HAVE seen the film — it's time to see it again! [click here for the direct Netflix link]

During my obsession with TIMES SQUARE in the early '90s I did a substantial amount of primary research on the film's production history and script development. The article below first appeared in San Francisco’s Bay Area Reporter in September 1993 in conjunction with a screening of the film presented by Frameline (the San Francisco International Lesbian & Gay Film Festival) at the Roxie Cinema with star Robin Johnson in attendance.


TIMES SQUARE: The Story Behind The Dyke Cult Classic

Allan Moyle's 1980 teenage girl rock 'n roll adventure, TIMES SQUARE developed status as a lesbian cult film with showings at lesbian and gay film festivals in New York and San Francisco in the early and mid 1980s and continues to be a favorite at lesbian and gay film festivals in the early '90s. Long-standing rumors about lesbian content removed from TIMES SQUARE have provided ample fodder for lesbian readings of the teen girl buddy movie. Indeed, a look at Jacob Brackman's original unpublished script of May, 1979 (on file at the University of Southern California Script Library) reveals many erotically-charged scenes between the protagonists, Nicky (Robin Johnson) and Pammy (Trini Alvarado). Some of these scenes were removed from the script prior to shooting, some of them were shot and then excised from the final cut of the film. A fragment of one such excised scene appears in the film's preview trailer - it is a one-second, barely perceivable, clip of Nicky and Pammy playing together in the river.

The basic plot of the film is conveyed in its publicity blurb: "In the heart of Times Square, a poor girl becomes famous, a rich girl becomes courageous, and both become friends." Pammy is the quiet and sheltered daughter of a prominent politician, Nicky is a streetwise troublemaker. Admitted to a hospital for the same psychiatric tests, the girls share a room and get to know each other. They escape from the hospital, create a home for themselves in a dockside warehouse and live their lives together against the gritty urban backdrop of Times Square. There's tons of romantic tension between the girls, and, most importantly - they love each other and they're not interested in boys. As their friendship begins, Pammy's first feelings for Nicky are expressed in a poem she writes in her journal (which Nicky steals): "your ribs are my ladder Nicky, I'm so amazed, I'm so amazed." Pammy later recites T.S. Eliot to Nicky and proclaims to her, "everything you do, or you say, is poetry. At least I think so."

In their poetry, music and other idiosyncratic forms of artistic self-expression, the girls perform for each other, and together, throughout the film. Each gives loving support to the other in their artistic pursuits as they encourage one another to grow and develop self-confidence.

Early in the film, Nicky gets Pammy a job as an erotic dancer, "I'm brave, but you're pretty. I'm a freak of fuckin' nature," she tells Pammy as Pammy prepares to go on stage at the Cleo Club. Nicky (with her hair tied back and looking as butch as ever) positions herself at the front edge of the stage to watch, and Pammy focuses on Nicky as she begins to dance (in the original script she dances topless). In a later scene at the Cleo Club, Pammy watches Nicky perform her song "Damn Dog" (a poem Nicky had first read to Pammy on bended knee: "I can lick your face, I can bite it too, my teeth got rabies, I'm gonna give 'em to you. I'm a damn dog.")

While there's no explicit lesbian content in the film, the romantic tone of Nicky and Pammy's interactions is undeniable. The original script had several scenes and plot elements that developed this aspect of Nicky and Pammy's relarionship, including a scene of their first meeting in the hospital, in which they have to undress in front of each other; two scenes where they take off their shirts and play together in their underwear in the river (the clip of which remains in the film's trailer); a wrestling scene; a scene of the first night that they sleep (sleep, not fuck) together and a scene of Pammy dancing topless at the Cleo Club. Most of the scenes removed from the script/film are scenes involving erotic tension or physical contact between the girls.

There are many rituals remaining in the film, in complete forms or as remnants of rituals excised from the original script. The film relies heavily on ritual and symbolic meaning, and, in fact, contains an excess of overdetermined pieces of dialogue, references, ideas and objects that signify the girls' bonding together and rebellion against society. After they escape from the hospital, they cut each other's wrists and hold them together to become blood sisters; they make a pact that they will shout each other's names when they need each other; they call themselves the Sleaze Sisters; they have their own sayings like "No sense makes sense;" they write and perform poems and songs; they drop TV sets off of buildings as one of their trademarks and they wear garbage bag outfits and black out their eyes.

Of the ritualistic elements removed from the film, three are especially significant as they convey the intensity of the bond between Pammy and Nicky. Early in the script, just after they escape from the hospital, they henna and cut each other's hair (with this scene removed, their hair inexplicably changes color and length in the second reel of the film). The girls also create a journal together, called the Doomsday Book, to write their poetry and songs in (the scene where Nicky burns the book at the end of the film is still intact although all reference to the book itself has been removed). Also excised is a scene, again relatively early in the script, where Nicky "pulls up her shirt and pulls down her jeans a little to show Pamela a tiny P and an N, tattooed prison-style on her abdomen. 'I got a lot of dumb ideas. But at least I make 'em up myself,'" says Nicky.

TIMES SQUARE is one of the most remarkable rock n' roll soundtrack movies ever made (artists include Patti Smith Group, Pretenders, Talking Heads and Roxy Music), and the soundtrack often provides romantic commentary on the developing relationship between the girls. "You Can't Hurry Love" accompanies their escape from the hospital, and when Johnny (Tim Curry) the disc jockey learns that "you two sweethearts have a favorite song" he plays it for them. The song is dyke-rocker Suzi Quatro's "Rock Hard."

In a letter to her father, which Johnny reads over the radio, Pammy proclaims, "We are having our own Renaissance." Indeed, they create their own scavenged culture in their pastiche clothing, the decor of their squat on the pier, their poetry and music, and in their own unique brand of political activism. They decry the hypocrisy and prejudice of the establishment in a live radio performance of "Sleaze Sister Voodoo" in which they proclaim: "Spic, nigger, faggot, bum/Your daughter is one."

Patti Smith's darkly co-dependent dirge of obsessive love, "Pissin' in a River" signals the beginning of the end for Pammy and Nicky. In the most heartwrenching scene of the film Nicky destroys their home, burns their journal, and throws herself into the river. She emerges sobbing, "What the fuck is wrong with me?" Distraught, she storms into Johnny's radio station, "put me on the radio, I got somethin' to say." When Johny hesitates she smashes the control booth window, shouting, "You fuckin' little straight!" She then calls out her song to Pammy on the air: "My heart/it's pumpin'/my foot/it's runnin'/my head/it's hurtin'/it's hurtin' me./I never told you/everything/I never said the stuff I should/I was chicken to tell you/I never thought I could./ Find me/help me/save me./Can you hear me?/Can you feel me out there?/Pammy! I'm callin' you Pammy! Pammy!"

While Nicky's previous song to Pammy, "Damn Dog" had a sexy edge to it, this one is a desperate cry for help as she realizes that they must go their separate ways. Their break-up is partly prompted by Nicky's jealousy at the possibility that Pammy might be interested in Johnny (this possibility is quickly dispelled as Pammy tells Johnny that she hates him). Thinking she has lost Pammy, Nicky's jealous rage is succeeded by a deep depression. Pammy makes it clear to Nicky that she loves her but says, "I can't be like you." Nicky's final statement, as she performs "Damn Dog" in Times Square, is a proclamation of her love for Pammy, "she was the best friend I ever had." Nicky turns and dives into the crowd of teenage girls below, smiling and waving back at Pammy as she is carried away by her adoring fans.

Although the removal of so much material from the original script gives the film a fragmented feel and sometimes sloppy continuity, the bond between the girls is always clear, and always has some proto-lesbian resonance to it. As such, TIMES SQUARE is a marvelous experience not only for lesbian youth, but for any girl who's ever had a crush on a girl or who's wanted to see girls on film without boys in the middle.

The most intriguing thing in the unpublished screenplay of the film is the following scene description (not in the film), which begins towards the bottom of a page, the next page of the script is missing:

NICKY is pumping iron with a set of weights she has fashioned from a lead pipe and some iron wheels. PAMELA watches proudly from across the room, where she is sewing.

NICKY - Even though you may stagger…

Emmett Sleepy do Boogie Honeycut said…
My all time favorite too...amazing how few people i know remember this film. thanks for the great write up!
9:10 PM