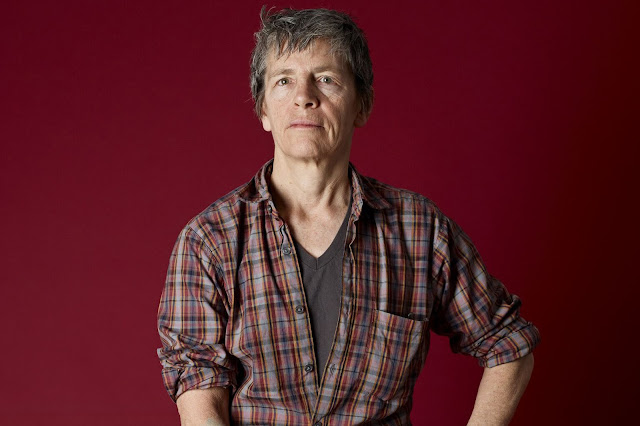 A love letter and short interview by Jenni Olson that was published somewhere back in the day. Unearthed from the archives of 1992, yet no less relevant these many years later.

I am always hungry
and wanting to have
sex. This is a fact.

So begins "Peanut Butter" from Eileen Myles' 1991 collection of poetry, Not Me (Semiotexte).

I fell in love with Eileen Myles in 1989 when I first read her collection of short stories, Bread and Water (1987, Hanuman Books). Her simple reflections on life and love (and her picture on the cover) captured my heart. Who could resist such temptingly cynical prose as, "A woman uses you because you let her in so naturally never expected it's just chess."

In 1991 I got myself onto Eileen's campaign letter mailing list (she was running for president as a write-in candidate). Eileen's mailing list. Eileen was writing letters to me.  She spelled my name wrong on the mailing label, but I didn't mind. She called me "Dear Citizen." A bit impersonal, but sort of a sweet idiosyncrasy, I thought (she was a poet, after all). She wrote about all kinds of things — political, and, well, personal. And she would stick the stamp on my envelope upside down. You know what that means. After awhile I realized that the stamps she used had a picture of the White House and a big American flag on them. So maybe it was just a political gesture. She probably put everyone's stamps on upside-down. Still, I think it was also her way of saying what Ross Perot got to say on national television — that she was running for president because she loved us.

In May, Eileen came to San Francisco to do a reading. At last I would meet her… and not have anything to say. "Loved your reading. Thanks," I managed anxiously.

I finally got the chance to interview Eileen in October of 1992 during her presidential campaign tour. In person, she's more handsome than I'd expected — looking like a full-blooded Kennedy, and with an unnerving idiosyncratic (Eastern?) personality that makes me incredibly anxious. Her gestures, expressions, speech are abrupt and bursting. Like her poetry. Interviewing her I feel too eager, feel like she doesn't know what to do with my nervous intensity. I'm afraid I'm acting like a fan. The whole experience makes me feel like crying.

Throughout 1991 and 1992, Eileen merged art and politics in a fabulous propaganda trek which took her to 20 states across the country, as well as Mexico and Canada. Keeping supporters informed through her unique series of campaign letters, Eileen expressed platforms on everything from reproductive rights to the North American Free Trade Agreement. She received some mainstream media coverage (MTV even interviewed her), and although Clinton won the race, she says of her campaign, "As an artist and poet it provided tons of opportunities for me to make speeches and make my work become more political."

Discussing her evolution as a writer, she recalls, "I didn't come out 'til I was 27. My poetry really took off when I came out. Falling in love and writing poems seemed like the same gesture." Personal changes in her life led to political changes in her work, she explains, "I stopped drinking almost ten years ago. My work started to get political when I got sober."

With her sensual vocabulary and dry sense of humor, Eileen entwines the personal and the political in both her prose and her poetry. In "A Poem" (from Not Me) she touches on relationships, world views and the meaning of art:

Symbolically
I want my black jersey back. Realistically
you must give it to me because I will keep
talking to your machine if you don't.
Our mayor is a murderer, our president
is a killer, Jean Harris is still not
free, which leads me to question the
ethics of our governor who I thought
was good. There is an argument
for poetry being deep but I am not that argument.

Eileen identifies as a "lesbian poet" but acknowledges that she has little in common with the canon of lesbian poets that includes Adriene Rich. The pitfall of, "being labelled a lesbian artist," she notes, "is that people think it tells you something about content. But I know it doesn't. It simply tells you something about me. And there is a gap between me and my work."

Although her presidential campaign is long past, her political campaign is only just beginning. "Ending things is my favorite part—the poet part, full of death & incredibly sweet," she wrote in her final campaign letter. "At this point I can say any damn thing I want."

Rate of call girls in Ahmedabad