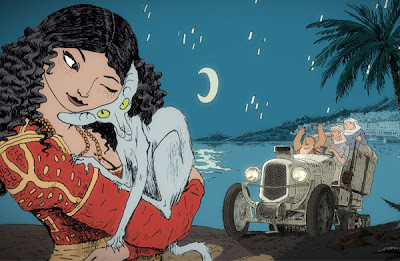 Just wanted to share a movie tip for January. From the awesome folks at GKids (who released the wonderful family film, A Cat in Paris) comes the US release of The Rabbi's Cat. The film is opening in San Francisco at the Landmark Theatres (click to see which theatre) and in Berkeley at the Shattuck — on January 18th. This charming, smart and funny movie is an enjoyable family film for kids 10 and up (it does have subtitles so for the younger ones you will have to do some live translation). Starring a philosophical feline who aspires to have his own bar mitzvah (so he'll be able to marry the rabbi's daughter), this hilarious film is beautifully animated and is as entertaining for adults as it is for kids. Check out the trailer below, get out to see the film on the big screen and also check out this great GKids DVD Guide for more unique family friendly movie options.
Email Post
Labels: Film Review Jewish Judaism