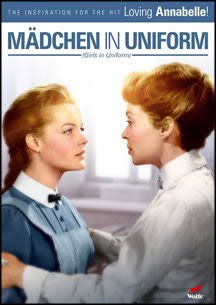 Bay Area film blogger Michael Hawley just gave a nice shout-out to the Frameline34 presentation of the 1958 Romy Schneider remake of MADCHEN IN UNIFORM as part of his Top Bay Area Repertory Screenings for 2010. The screening was introduced by yours truly, hence my interest — here's his nicely phrased appreciation:


A whole lot of LGBT folk must've played hooky from work to catch this mid-day, mid-week revival from 1958 – itself a remake of a 1931 queer cinema classic. Romy Schneider and Lili Palmer are respectively radiant as a student obsessively in love with her boarding school teacher – to the extreme consternation of battleaxe headmistress Therese Giehse. Shown in a gorgeous and rare 35mm print, with the inimitable Jenni Olson delivering a dishy intro. Frameline34's other revelatory revival was Warhol's 1965 Vinyl, in which Factory beauties Gerard Malanga and Edie Sedgwick dance a furious frug to Martha and the Vandellas "Nowhere to Hide." Twice.