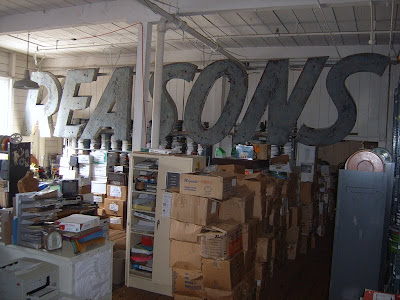 Back in April 2007 I wrote this blog post for OurChart.com (the fabulous L Word social network site that no longer exists). It is the 5th anniversary of the demise of the legendary 17 Reasons sign and seems a good time to re-post this. If you have not seen this episode of The L Word you definitely should (the sign figures heavily in the plot). Read on to learn more and you should also check out this great new piece about the sign on MissionLocal.org — which is what reminded me to post THIS item right now..

The legendary 17 Reasons sign was one of the most treasured landmarks of San Francisco’s Mission District until it was surreptitiously torn down in May 2002 and replaced by a thirty-three foot square illegal billboard (which continues to be leased by San Francisco outdoor signage company Foster Media Inc.) The “Why” part of the original sign had been taken down years prior, and currently resides in a nearby design studio on Shotwell Street.

An Architectural Touchstone
Like many San Franciscans, I fell in love with the 17 Reasons sign the first time I saw it – monumental and enigmatic, perched high atop the Thrift Town at 17th Street and Mission this nostalgic beacon had the charismatic appeal and architectural grandeur of Great Art. And the whimsical joy of poetry! It’s meaning was so unclear that it lent itself to philosophical, even spiritual interpretation. It was a true icon (or as I said to the San Francisco Chronicle in 2003, during the time when there seemed to be some hope of saving the sign: "It has always been inspirational to me as an artist. It's an architectural touchstone.")

In 1997, when I made my first 16mm urban landscape film, Blue Diary (now available as an extra on The Joy of Life DVD – click HERE to pop it in your Netflix queue today) the 17 Reasons sign was one of the first locations we shot. It was so beautiful in the early morning light.

Erected in 1935, the 17 Reasons Why sign was a terrific Depression era commercial advertising structure, which originally sported neon tubing and stood as a neighborhood landmark promoting the Redlicks Furniture Store (check out this Google map link for 2101 Mission Street and you can see the billboard atop the building).

1,089 square-foot spectacular
Local film archivist Stephen Parr looked out his window one fine morning in May 2002 to see the sign being cut apart and hauled away. Parr went all the way to a Benicia salvage yard to rescue the pieces and bring them back to the neighborhood in hopes of somehow restoring the icon to its rightful home. Neighborhood activists then unsuccessfully approached the San Francisco Board of Appeals in an attempt to force the building’s owners to restore the sign (and remove the billboard which was erected less than a year after the passage of Proposition G, a measure banning all new general advertising in the city). Alas, their efforts failed and the billboard continues to blight the intersection (or as the Foster Media Inc. website proudly proclaims: “This 1,089 square-foot spectacular can be seen by heavy vehicular and pedestrian traffic on Mission Street, travelers heading east on Seventeenth Street and residents going through the Castro District.”)

I stopped by Parr’s office (home of The San Francisco Media Archive and Oddball Film + Video) to photograph the sign last week. The word REASONS takes up the entire wall of one room. The twenty-one-foot high 17 had to be cut into pieces for transport and is now nestled between the shelving units that hold Parr’s vast holdings of archival film prints (which also includes the Jenni Olson LGBT Film Archive).

Parr expresses little hope that the sign will ever be restored to its original home. “I’m still trying to find a home for the 17 -- preferably indoors,” says Parr. “My ultimate goal is for it to be all together in one place, here in the Bay Area. Like the lobby of a building or some large public space.”

How did it end up on The L Word?
The other story behind the story: OurChart’s Beth Callaghan (photographer and erstwhile inner-city archeologist) has been documenting San Francisco’s historic urban advertising for years — from the faded, painted ads that once covered the exteriors of Tenderloin hotels to the understated Lipton Tea and MJB Coffee promotions that once graced the windows of every corner store in town. When L Word creator Ilene Chaiken needed a piece of vintage sign art for her season finale plot device she turned to the expert, and Callaghan turned her on to the long-lost 17 Reasons sign.

My original OurChart piece had lots of images in it but I don't have time to pull that all together, so. Here is a link to my Flickr photoset with a bunch of shots. And to see more images of the sign visit the 17 Reasons Why Group Flickr Pool!
Email Post
Labels: 17 Reasons film history Muses San Francisco The L Word

Anonymous said…
I saw the last chapter of 4ª temp of The L Word yesterday, and I want to know more about the "17 reasons why", because I can't to understand what is mean that. Please, darling Jenn Olson, can you explain to me? Give more information for me? It is a extraordinary monument. I'm excited about that, it's wonderfull. I'm brazilian girl and ask you to reply in my e-mail (juliana_ucha@yahoo.com.br). I realy expect a response your. Kisses!
6:27 AM