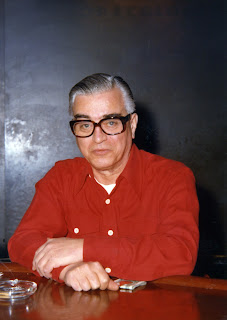 I feel compelled to write about my stepfather, Chuck who passed away on Tuesday morning at the age of 91. He was an amazing man and had a tremendous influence on me. I am always grateful to him for instilling and encouraging my passion for classic Hollywood cinema. From a very early age I used to flip through his big stack of 8x10 movie stills from the films of 1935 (the year he worked as an usher at the University Theater — now known as the Varsity — in Dinkytown near the University of Minnesota East Bank campus). *Cited in 1999 City Pages article about me and my career as a film historian.

When I went to visit him a few weeks ago I recorded some of our conversations. He was speaking very slowly because of his recent stroke, but was really philosophical and so profound. I transcribed some of it last night as I was writing his obituary. It comes off very literary — almost like it was written, but this is literally what he said as he was reflecting on how hard it was to be approaching the end of his life in such a compromised state:

May his memory be for a blessing. Period.

NOTE: Here is the link to the obituary I wrote for Chuck, published in his hometown paper, the Albert Lea Tribune.
Email Post
Labels: memoir