Get "Trailers, Schmailers" on DVD! 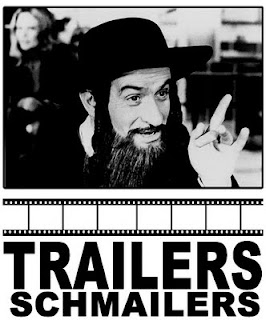 You're wondering what to get Bubbe and Zayde for Hanukkah?

Here's a nice little tchotchke they're sure to love!

I curated this program of classic Jewish movie trailers for the San Francisco Jewish Film Festival in 1997 and am finally making it available on DVD just in time for Hanukkah (yes, just barely in time it's true).

Trailers, Schmailers is an 82-minute program of more than 30 Jewish coming attractions from 1937-1997 in color and glorious black and white (these are the original trailers, transferred from original 35mm prints). From the Marx Brothers to Fiddler On The Roof, this feature-length compilation of Jewish film trailers offers a compact glimpse at the history of Jews in American cinema. These original coming attractions trailers offer a unique insight into the relationship between Hollywood’s studio marketing departments and the growing visibility of Jews in American life. Trailers Schmailers includes playful spotlights on Woody Allen and Barbra Streisand, an overview of films about New York Jewish life, a look at the evolution of films about the holocaust, and much, much, more.

Esteemed Jewish film critic Michael Fox called Trailers, Schmailers: "Terrific" on its premiere at the San Francisco Jewish Film Festival. At the Jerusalem International Film Festival it was hailed as: “Wonderfully amusing. Everyone leaves the film with a smile.”

Click thru to the Trailers, Schmailers website to see the list of trailers included in the collection and more details. The DVD is available to individuals for just $24.95; there's also an institutional rate option (which includes public performance rights — for JCCs, libraries and community groups) for $72. It really does make a great program to generate discussion about Jewish representation in cinema — or just to create lively dialogue about memories of the Jewish films that have been most important to each of us over the years.
Email Post
Labels: film history Jewish