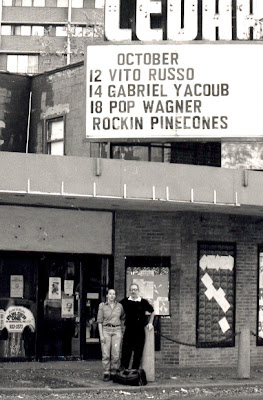 A few months ago the folks at MUBI.com asked me to contribute a list for their "ten films that saved your life section." I sent them a list (see below), but more importantly I included this note which I wanted to share here as a nudge to encourage everyone to order their Frameline (June 14th at 7pm) and Outfest (July 12th) Opening Night tickets for VITO so you get to see it with an audience. And you'll also want to tune in and watch it on HBO on July 23rd.


The truth is, it was a book that saved my life. A book about film. Vito Russo’s pioneering examination of homosexuality in Hollywood cinema (The Celluloid Closet) was what facilitated my own coming out and launched me on my career as a film programmer and film historian. Rob Epstein and Jeffrey Friedman’s documentary of the book is pretty awesome in its own right. I have not yet seen Jeffrey Schwarz’s new documentary Vito (which I have a brief appearance in) but I’m sure it will save a few lives in its account of one of the most important American gay activists in our history.

Note: That's a picture of Vito and I in front of the Cedar Theatre in Minneapolis in about 1986 or so.
Email Post
Labels: film festivals film history frameline LGBT film lgbt film history memoir Outfest Vito Russo